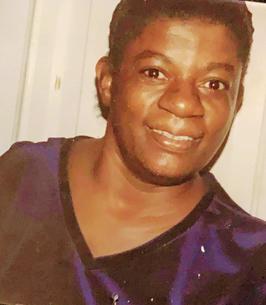 Ardensia Phillips, age 60, of Erie, Pennsylvania, passed away Wednesday, March 24,
2021 at UPMC Hamot.
She was born in Sharon, Pennsylvania on June 15, 1960 to her beloved parents the late
Charles E. Phillips and Doris Cleveland Phillips. Ardensia relocated to Erie in 1973
where she graduated from the former Tech Memorial High School Class of ‘78.
She worked as a custodian at the Gertrude Barber Center for several years. She was a
homemaker and loved to cook and entertain. Ardensia had a love for music and enjoyed
watching the “Twilight Saga” series. Some of her most memorable moments were spent
with her dear friends, Diana Riley and Daisy Lofton. She will be deeply missed by all of
her family and friends.
In addition to her parents, she was preceded in death by one brother, Terrance Phillips
and both maternal and paternal grandparents.
She leaves to cherish her memory; daughter, Tiffany Phillips of Erie; grandchildren,
William, Quintin and Lakeeshia Clark, Michelle Henderson and Nikita Allen, all of Erie;
siblings, Tina Phillips (Ira) of Charlotte, N.C., William Phillips of Farrell, PA., Lawrence
Phillips, Patricia Phillips, both of Salisbury, N.C., Charles Phillips, Crystal Phillips
(Eddie), Thomas Phillips, Maurice Phillips, all of Erie, PA. and a host of nieces,
nephews, cousins and friends.

All rights reserved. This obituary is also archived at obittree.com