To share your memory on the wall of Glenn Lyons, sign in using one of the following options:

He was the youngest twin born on November 9, 1969 to his beloved parents Kennetha K. Paul Lyons Beason and Grover Beason.

Glenn was an avid Boston Celtics fan and loved to watch sports with his brothers. He would often debate that the formerly known Washington Redskins was the greatest team in the NFL.

Glenn had a wonderful sense of humor and will be deeply missed by his family and friends.

To send flowers to the family or plant a tree in memory of Glenn Lyons, please visit our Heartfelt Sympathies Store.

We encourage you to share your most beloved memories of Glenn here, so that the family and other loved ones can always see it. You can upload cherished photographs, or share your favorite stories, and can even comment on those shared by others. 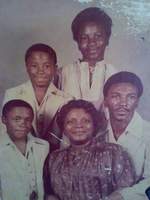