To share your memory on the wall of Walter Thomas, sign in using one of the following options:

To send flowers to the family or plant a tree in memory of Walter Thomas, please visit our Heartfelt Sympathies Store.

We encourage you to share your most beloved memories of Walter here, so that the family and other loved ones can always see it. You can upload cherished photographs, or share your favorite stories, and can even comment on those shared by others.

Posted Oct 22, 2020 at 12:00am
My father Walter  Thomas  was a loving kind man full of joy and laughter. His love for God almighty and his children & grandchildren he loved so much.??
Comment Share
Share via:
C

Posted Oct 19, 2020 at 12:00am
So many memories granddad that you left us with, but what stands out the most is the unconditional love that you spread. And believe it or not on your resting day your love was present l love you forever and will always cherish our many conversations
Comment Share
Share via:
MW

Posted Oct 17, 2020 at 12:00am
A Tribute to My Brother Walter Praise be to God, one thing I know for certain about my brother Walter is that he loved his family. I often preach and teach about love being an action word, not merely a feeling. The Bible tells us that God is love. We are also to love one another as God has loved us. I’m talking about that agape love, unconditional, sacrificial, undeniable love. Not based on the actions of another, that healing kind of love that gives rather than always taking and receiving. You can tell the people of God by the love they have for their brethren. Only two commandments were given to us by God that He’s holding us accountable for: The 1st one is to love the Lord thy God with all thy heart, soul, mind, strength and everything that’s within us. And the 2nd commandment God has given us is to love one another as Christ has loved us. I loved my brother and I know my brother Walter loved me and he loved the Lord. I have been thinking about heaven for quite a while now, for the past couple of months I’ve been thinking about heaven. In fact, I preached a sermon two Sundays ago that was titled “Heaven Is On My Mind”. Little did I know then, when I was preaching that sermon, that Jesus was on His way here to have my brother pack up and go back with Him. Jesus is coming back again. He’s coming back for me and He’s coming back for each one of you. Are you ready? Family I pray and I hope so. God Bless you all! I love each and every one of you and pray to see you one day. This is a tribute to my brother Walter. With Love, Pastor Maggie H. White
Comment Share
Share via:
MW 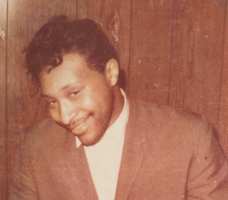